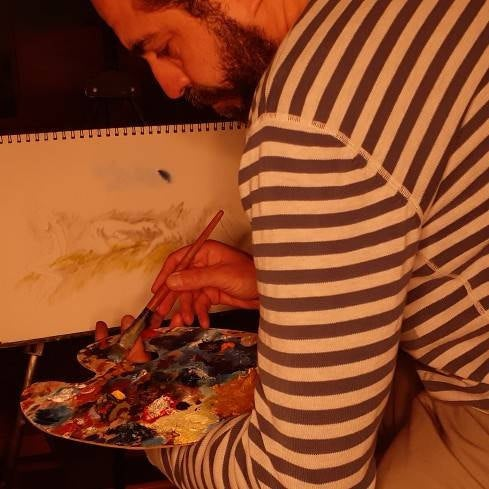 a Visual artist born and live in Nazareth city. studied fine arts in Nazareth art college. his first solo exhibition was exposed in 2011 in Nazareth cultural center. since then he had participate in other exhibitions jointly independent artists and foundations. Elias is the founder, curator of NazArt gallery and Elias A. art studio .

IMPRESSIONS / an absoluteness within our impressions

Starting his own career as an independent artist in 2007 searching for his own unique language in art he starts his first series of charcoal drawings ” PALETTES FROM MEMORY ” the series which hold a charcoal urban view of Nazareth city and had exposed in Nazareth cultural center. later it had become to “IMPRESSIONS FROM NAZARETH“ theme. after this he had an expertise with “IMPRESSIONS NATURE “ and landscapes paintings using oil colors 2010-2015, a “FIGURES“ drawings with pastels and charcoal to creating an abstract series in 2015-2016.

finally using a unique techniques as combination between charcoals with oils, acrylics & pastels together he had found the way he could express his own feelings and realizations through Figurative art series that demonstrate humanity and nature as an abstract case –  “ABSOLUTE CASE ” theme.

Elias A. works mainly concern the combination of humanity and nature as an abstract concept with an emphasis on interpersonal conflict and emotions that touch us to life itself

his inspiration he gain over from the pure of nature, humanity and Jesus Christ realizations .nature and humanity is the holy temples that motivated him during painting his paintings. by searching to understand the pure intent of the creator in his creatures he had starting studying impressions that we receive by viewing the creatures trying to reach and may show the hidden passionate meaning of them. it’s the passionate meaning that unite all beings in one living life, the Meaning of existence in every creature, assets and act. his passion is for impressionism & figurative art, he use all kinds of methods, oil on canvas, charcoal and pencil, pastels on canvas/paper, acrylic. he also had a collection of contemporary paintings spread in fate bene fratilli convents and hospitals. when he had blessed with his new baby boy he had an experience in the field of fascinating wall paintings for children. his MURALS is hand painted which may give the painting a life sense.

BELIEF AND CREATIVITY through giving and love which considered  the guide lines of life, that’s why he give some of my art’s for free, and that’s why he had started NAZART MOVEMENT which meant to enrichment and empower his by creating art not for a profit cause, by donating money from his art’s income for ngo’s.

In 2016, Elias Akleh inaugurated the first studio in the center of Nazareth in the House of Friendship in the Mary’s well area. The building was an area of ​​50 square meters, divided into a studio and a showroom for work. On his own experience and his method of building paintings, the education included teaching several methods in a systematic and practical way, and during the first year he was able to organize the first group exhibition that included 30 artists, and this was the beginning of the exhibitions of the gallery. My father now organizes annual art exhibitions in a scholastic and professional manner with an initial philosophical character. In 2017, the studio moved to the Old City, next to the Church of the Annunciation in an ancient Nazareth building, to move to the stage of artistic and cultural programs to establish artistic projects of an artistic, civilized nature, in addition to establishing projects of a social nature, such as establishing artistic tourism in the city of Nazareth. Local exhibitions, organizing international exhibitions, building six drawings for children with visual impairments, holding exhibitions in old buildings in the Old City, reviving artistic programs.

My artistic practice regularly engages with the following themes or issues

This site uses Akismet to reduce spam. Learn how your comment data is processed.